Have you ever known someone who feels like Mother's Day is their own personal Holiday??? A day in which they are supposed to be catered to, served, coddled, given gifts & cards, do absolutely nothing - while having their every need, wish, and desire granted? If these unrealistic expectations are not met, then they pout and decide that it means that their family is unappreciative and doesn't love them. (As a little side note, usually if this same "hypothetical" mother had a husband with similar expectations on Father's Day - she would have a coronary and think he was selfish and pig-headed, but that's an entirely different Blog)

Now, I don't think I've ever been the extreme of this "hypothetical" mother, but I think I've had leanings in that direction from time to time. (you know; thinking things like, "I shouldn't have to help get anyone ready for church today, it's my DAY OFF," or things like that...) WELL, this year I determined to have a wonderful Mother's Day. And it was!
I decided the night before that I would make it wonderful day by CELEBRATING and REJOICING and ENJOYING the role of MOTHER. Tim asked me what I wanted him and Aaron to make me for breakfast, and instead of sitting there waiting to be served, I sat with Aaron and helped him read the instructions to make the muffins. I fried the hash browns and eggs while Tim took care of the bacon and juice. We all ate together and it was wonderful. We all worked together to clean up. It was glorious. Tim and the kids gave me a few simple gifts that I will enjoy. We played a game together as a family before church. It was as delightful as any game can be when you are playing with young children:) but it was great!
I put a ham and potatoes in the oven while we were at church and then we took it over to my mom and dad's to share dinner with them. One the way, we dropped dinner off (and had a short visit) with my grandparents, (who are 88 & 90 years old and are stilling living on their own in their own home... that looks like it can't last much longer, they are getting so old and frail. They've been married 69 years this Sept. what an amazing example they are to me - but that too, is another blog post altogether) After eating with my folks, we played a game, then came home and put the kids to bed.

I had no grand and glorious expectations, and I had a wonderful day being a MOTHER. (and wife, and d 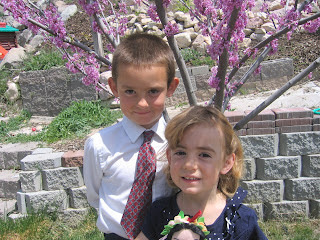 {Tim took this photo of Aaron and Katrina out in the back yard right before church. (that's my Eastern Redbud you see in bloom) It turned out cute and I wish I had time to get Caleb and Bryan in the shot, but we were running a bit late as it was, so no family photo this time...}
Posted by Jeri at 5:40 PM

What a great attitude! You ARE great mother. Even if you get tired or yell at kids are feel like being lazy once in a while. Those things still make a great mom because you are WOMAN in all her glory.

Thats for this post Jeri. I really loved it.

What a great Mother's Day. What a great post. Thanks. Sounds like you had a great perspective and a great day. Being with those we love is what it is all about.

I love the picture of the kids. It is so cute!! I am glad you had a great MOthers day. It seems to all be in the attitude I have decided. The above post of Aaron is too funny. Kids say the funniest things. :)